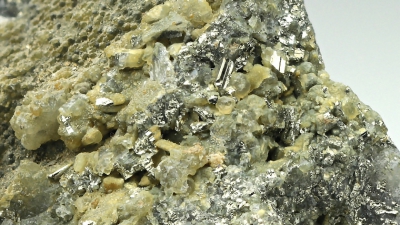 The disproportion of a crystal lattice of the kalaverit demented chemists. But the Russian scientists together with foreign colleagues have managed to understand how she is suited. [hi-tech.mail.ru]

Kalaverit — compound of gold and tellurium with a formula AuTe2. This mineral is known to mankind as a gold source long ago. But its structure remained a riddle for scientists. She can't be described, using the same equations, as for the majority of minerals.

The Russian scientists from Institute of physics of metals, and Physics and Technology faculty together with colleagues from the Cologne university could explain Skolkovo how mysterious mineral is arranged. They have studied electronic ranges of the kalaverit under pressure and at introduction of impurity. Gold in this connection theoretically has to have the valency (ability to form a certain number of chemical bonds) equal to two. But actually its valency smoothly changes within a crystal that leads to distortion of structure of a crystal lattice.

Thanks to the algorithm under the name USPEX created by scientists from Physics and Technology faculty, physics could also predict structure of all known tellurides of gold. Moreover, among these connections there is one more, still not found, with a chemical formula AuTe